Research into alkaline ionized water began around 1931 and in 1965 it was approved as household-use medical apparatus with beneficial effects for stomach and intestines, but here we would like to introduce its history and societal trends from the dawn of alkaline ionized water through the feverish boom to the period in which its utility was proven based on scientific fundamentals.

Research into the effects of alkaline ionized water on animals and plants was started around 1931 when synnohl electric machinery medical researcher Michisue Suwa focused on the relationship between water and electricity.
Mr. Suwa repeatedly investigated and experimented with the water quality of water from various regions throughout the country, and in 1952 developed the first equipment for electrolysis of water. (At that time, alkaline ionized water was called "Synnohl liquid".)
Thereafter, he repeated experiments with the collaboration of Professor Akiba at the University of Tokyo. First, a Synnohl Electronic Agricultural Machine was manufactured in 1954 as an agricultural application (rice cultivation) and its usefulness for agriculture was studied. (At that time, this was taken up by newspapers as the "Synnohl agricultural method", and was a topic of conversation.)
On the other hand, experimentation for medical applications was difficult and they struggled, but through the accumulation of clinical testing and actual use experiences of numerous doctors and members of the general population, in 1958 the "Synnohl Liquid Manufacturing Apparatus" was developed, and in 1960 the Synnohl Liquid Medical Science Research Association was established, achieving a shift in practical application of electrolytic water from the agricultural field to the medical field.

With this momentum, in 1962 separate businesses from Nagano Prefecture and Kyoto Prefecture brought electrolytic apparatus to the Cabinet Welfare Bureau (the equivalent of the Ministry of Health, Labour and Welfare at that time), and applied to manufacture the apparatus as a medical device.
However, since there are differences in tap water in each region, there were limitations to using the synnohl liquid manufacturing method to manufacture alkaline ionized water with the same characteristics for the water quality of each region.
Therefore, in order to include calcium ions stably and maintain the alkaline pH with the tap water of any region, they were directed that the addition of calcium lactate should be a prerequisite, and finally manufacturing approval for a "synnohl liquid manufacturing apparatus" was granted and they were recognized as being "medical substance generation apparatus" under the Pharmaceutical Affairs Law.
The beneficial effects for which they were approved as medical devices under the Pharmaceutical Affairs Law are as follows:

(From the Bulletin of the Monitoring and Guidance Dept. of the Ministry of Health and Welfare, Pharmaceutical Monitoring Vol. 57, issued on October 19, 1992)

Further, there is also the background in which the Ministry of Health and Welfare's Pharmaceutical Affairs Bureau Manager sent Pharmaceutical Announcement Vol. 763 (October 8, 1965) to the governors of all prefectures notifying them of the above-stated beneficial effects and their recognition for medical-use electrolytic water manufacturing apparatus.
From then on, medical substance generators with manufacturing approval were introduced to the market one after another.
Development of electrolysis equipment also progressed, and in 1979 a continuous-type electrolytic water generator that could be connected directly to the water tap (later, water-purification functions were also added) was approved, and from that time the name "alkaline ionized water" started to be used.

Since around the time of approval of continuous-type electrolytic water generators, there was an upsurge in awareness of drinking water and health orientation in society, and alkaline ionized water was gradually recognized by society.
In June 1992, alkaline ionized water was introduced as "Wonder water" on a television news program.
In the program, alkaline ionized water was used in hospital treatments, and the beneficial effects including those not recognized such as effects against diabetes, etc. were actually reported from a medical facility, and since then a tendency to expect beneficial effects from alkaline ionized water beyond those that were approved began to appear.
Against this societal background, the Association of Alkaline Ionized Water Apparatus was established in September 1992 centered on Division 2 of the Japan Home-Health Apparatus Industrial Association by all companies involved in the manufacture and sale of alkaline ionized water apparatus, who considered it essential to instruct people regarding accurate information and proper use of such apparatus in order to further increase quality and contribute to healthy, comfortable lives.

Scientific proof of the current level of alkaline ionized water

Alkaline ionized water apparatus has gradually spread in this way, but in December 1992 product testing conducted by the National Consumer Affairs Center of Japan raised doubts regarding the effects in the mass media.
Further, this topic was also taken up in the Japanese Diet (Public Welfare Commission of the House of Councillors of the 126th National Diet; March 26, 1993), and the Ministry of Health and Welfare requested the industry to provide scientific investigation results regarding the current level of quality, effectiveness, and safety.
The association accepted this request, and in February 1993 consigned the investigation to the Alkaline Ionizer Review Committee (Committee chairman: Professor Itokawa, Medical Dept., Kyoto University), and investigation activities were begun again into the safety and effectiveness of alkaline ionized water using the latest scientific focus.
In 1994 the Review Committee issued a report reverifying the safety and in 1997 verified part of the effectiveness for stomach and intestines of alkaline ionized water.
Based on these research results, the association is working to offer higher level products by revising regulatory standards for alkaline ionized water apparatus, etc.
Then in 1999, at the 25th General Meeting of The Japanese Association of Medical Sciences, in "Electrolytic Functional Water in Medical Treatment" from the Alkaline Ionizer Review Committee, the world's first double-blind comparison clinical testing for drinking water offered the conclusion that "Alkaline ionized water is useful".

Positioning as a household-use medical device based on scientific proof

This association used the safety and effectiveness information based on accumulated test results to introduce their own standards, and currently these are reflected in the certification standards for household-use medical devices JIS-T 2004 "Water electrolyzer for home use" (Original draft: Japan Home-Health Apparatus Industrial Association and Japanese Standards Association), and are defined as the standards to ensure safety and effectiveness.
In 2005, the Pharmaceutical Affairs Law was revised and as a result, alkaline ionized water apparatus was positioned as a household-use control medical device from the high level of its safety.
Further, currently JIS-T 2004 defines the applicability verification standards for alkaline ionized water apparatus as control medical devices, and the purpose of use and beneficial effects were reported in the Ministry of Health, Labour and Welfare Notification No. 112 as "generation of alkaline electrolytic drinking water for improving gastrointestinal symptoms".

For further development: Expectations for effectiveness of electrolytic functional water 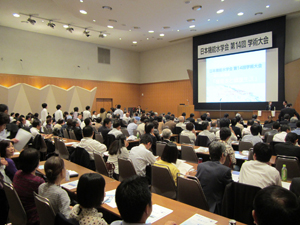 Currently, alkaline ionized water is labeled together with strongly acidic electrolytic water as "electrolytic functional water", and there is also a surge in momentum academically for research related to alkaline ionized water.
Every year, there are numerous research activities into new physiological actions of alkaline ionized water on living bodies reported at the Functional Water Foundation's main conference, the Functional Water Symposium, and also in the Japan Functional Water Society which was established in 2002. For the future, analysis of the physiological functions related to the effectiveness of alkaline ionized water and investigations of new "functions" are being carried out, and there are many expectations regarding these investigations and developments.
Even for this association, for the future, we will continue to accumulate safety information regarding further practical applications. We feel that there is a great need to broaden recognition of proper drinking methods and applicable symptoms, etc., and we will therefore strive to offer accurate information to avoid misconceptions and misunderstandings on the side of general consumers. On the other hand, as international interest continues to grow, we will continue to work hard in collaboration with other organizations and associations such as the Functional Water Foundation, Japan Functional Water Society, etc.